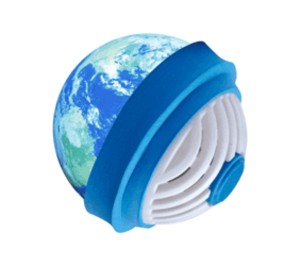 Aside from the fact that doing laundry for a family of seven is a lot of work, it also gets pretty darn expensive! So I was thrilled to try out the Robby Wash ball which claims to replace up to 75 lbs. of traditional laundry detergent, enough to last the average family a full year. While I have no doubt it won’t last nearly that long for our family, I’ve still been very pleased with my Robby Wash ball so far.

There’s no more goopy measuring cups or trying to figure out just how much detergent to use for a specific load. You just toss the Robby Ball in, and it takes the place of traditional detergent. I also like that it’s hypoallergenic and ecofriendly.

Robby Balls can currently be purchased through Oransi for $32.95.

To enter, tell me what feature you like most about Robby Wash.

Every reader has four methods available to enter this contest. Choose one each of any combination of method one, two, three, or four for up to a total of 4 entries!!!

1. Leave a comment. What is your favorite feature of Robby Wash?

2. Become a fan of Deal Seeking Mom on Facebook. Come back and leave a separate comment letting me know you’ve done so!

3. Join the Deal Seeking Mom Forums to chat about your great finds, special coupon codes, and chances to win exclusive giveaways. Come back and leave a separate comment letting me know you’ve joined or that you’re already a registered user!

(2) Robby Wash sets, as described above

This giveaway ends at 3:00 p.m. ET on Thursday, 4/22 and is open to all U.S. residents 18 years or older. I’ll use Random.org to select the winning comment. Winner will be notified by email and listed on my Giveaway Winners page. Winners must respond within 48 hours of notification to claim their prize. Good luck!