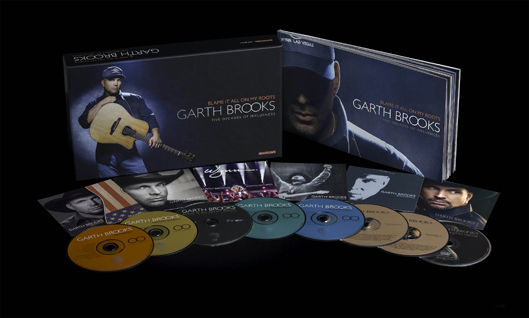 Me and Garth Brooks go way back… Well, not really, but I have been a fan for many years, and I have fond memories of singing karaoke to “Friends In Low Places” with my sorority sisters in college. Good times!

Sadly though, I’ve never had the opportunity to see him in concert, so I was super excited to learn about the exclusive boxed set, Blame It All On My Roots, that he’s releasing at Walmart’s Black Friday event (starting at 6:00pm local time on Thursday 11/28)! Not only does it contain a two hour DVD of one of Garth’s concerts recorded live at The Wynn Resort in Las Vegas, but it also includes four new studio albums that feature Garth performing songs by his greatest musical influences, one for each genre — Classic Country, Classic Rock, Blue-Eyed Soul and the Melting Pot.

If you’re a fan and want to win the opportunity to see Garth Brooks in concert, here’s where you want to pay close attention:

So now let me tell you about the time this happened…

Yes, that’s me and Garth Brooks, aaaaahhhhhhhhhhh!!!! It all started when the folks at Walmart asked if I’d be willing to take a last-minute trip to Nashville to talk with Garth about the boxed set release. Um, yes?!? And when I found out that some of my best blogging friends were invited too, well, there was no chance I was passing up this opportunity.

(Monica of Mommy Brain Reports, me, Lori of A Cowboy’s Wife, and Christine of From Dates to Diapers)

It was a whirlwind of a trip, but we packed SO much fun into it! We started the day off at the Country Music Hall of Fame, where we learned a ton about country music’s roots and saw memorabilia owned by famous country musicians over the years. I especially loved the Reba McEntire exhibit, which included a number of dresses she’s worn in concert and to awards shows over the years — lots of red in there!

We had some time to kill, so we walked up and down Broadway Street, checking out the honky tonks and doing a little shopping. There’s not a whole lot going on during the day, but I fully intend to go back again when I can hang out for an evening!

From here, we drove to Garth Brooks’ private recording studio for lunch. And this wasn’t just any lunch, but a fabulous homestyle meal of chicken fried chicken, creamed corn, roasted vegetables, green beans with ham, warm biscuits, and at least three different kinds of pie for dessert.

I was under the impression that we wouldn’t be meeting with Garth until later, but as luck would have it, just as I took a huge bite of those delicious green beans, in he walked, introduced himself, and immediately started asking us where we were all from.

To be honest, I’m not sure I would have recognized him on the street. Wearing an Oklahoma State sweatshirt and jeans, he didn’t quite fit that image that I had in my mind, you know, with the cowboy hat and all. But he seriously was just as nice and genuine as can be. He grabbed a piece of chicken and a napkin and just stood and talked to us for quite awhile while we were eating, until he finally to go take care of a few last minute details before we got to check out the studio.

After lunch we headed down to the recording studio where we had the opportunity to take some photos before hearing some of the new tracks from Blame It All On My Roots. I was under the impression that we’d be doing some formal interviews with Garth, but it was really just more like hanging out with an old friend for an afternoon, laughing and chatting.

I can tell you all that he’s very proud of these new studio albums, and he went out of his way to ensure that he stayed as true to the original recordings as possible. It was such an amazing experience to hear him share how each of the songs that he chose has influenced his music and see how much respect he has for these artists. It was truly an unforgettable experience!

Garth Brooks’ Blame It All On My Roots will be available starting at 6:00pm local time on Thursday 11/28 exclusively at Walmart for just $24.96. It’s definitely on my Christmas list!

P.S. If you’re really into the behind the scenes kind of stuff, check out this video that Lori put together with a bunch of clips from our visit.

A Visit with Garth Brooks!