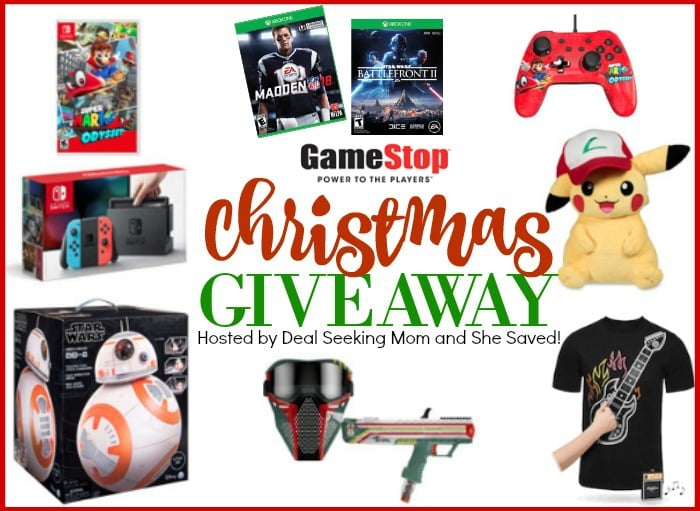 This post is in partnership with GameStop, your one-stop shop for stocking stuffers to gaming systems and everything in between. Thanks for supporting us and the brands we love!

GameStop is truly one of my favorite stores to shop for gifts year round. If you haven’t stopped in lately, you really should… They’ve become a one-stop shop for everything from stocking stuffers to gaming systems, plus everything in between!

You seriously won’t want to miss the AWESOME deals they’re releasing tomorrow. You can see all of the online GAME DAYS deals here and make sure to enter this amazing GameStop Giveaway worth over $800 (two winners!)

Find the hottest deals below, and then keep scrolling to enter to win an AMAZING giveaway. I’ve teamed up with my friend Keri Lyn from She Saved and we are each giving a way a HUGE GameStop prize package worth over $800! To enter for a chance to win, all you have to do is enter on the widget below (entering below will qualify you to win either prize package).

These deals all start tomorrow and run through December 24th, so your friends at GameStop have you covered for all of those last minute shopping needs. If you haven’t yet visited your local GameStop store, I highly recommend it. They have just about everything you could need for all of the gamers and collectors on your list!

GameStop is saving the day for holiday procrastinators with amazing deals on consoles, games, accessories and collectibles during GAME DAYS, from Dec. 17 – 24. From the Xbox One X console to this season’s most popular game titles and toys, GameStop is giving customers a chance to cross off everyone on their list at amazing prices.

Check out GameStop’s full lineup of in-store and online GAME DAYS deals here, and I’ve also listed them out for you here:

Game Deals: Up to 50% Off (Xbox or PS4, unless otherwise stated)

Now for the fun part… TWO lucky entrants will win a prize package which includes everything that you see below!!!

Nintendo Switch Console with Neon Blue and Neon Red Joy-Con
Introducing Nintendo Switch, the new home video game system from Nintendo. In addition to providing single and multiplayer thrills at home, the Nintendo Switch system can be taken on the go so players can enjoy a full home console experience anytime, anywhere. The mobility of a handheld is now added to the power of a home gaming system, with unprecedented new play styles brought to life by the two new Joy-Con controllers.

Jump into the Odyssey and explore new Kingdoms, with the Super Mario Odyssey Edition of the Wired Controller Plus for Nintendo Switch. Officially licensed and designed to celebrate the new game for Super Mario fans, this controller features soft-touch rubber grips for added comfort and 6 interchangeable analog caps for personal preference.

Bring home a beloved and iconic Star Wars character with Hero Droid BB-8! This interactive droid stands at a lifelike scale of 16 inches tall (19 inches with antenna). It moves smoothly and is capable of realistic interactions – just like in the film! Set Hero Droid BB-8 to Follow Me mode and it will roll beside you just as loyally as it would follow Rey or Poe! With voice recognition and remote control capabilities, it is fully interactive and ready to spin into action.

This Star Wars RC droid has authentic lights and sounds, plus film-accurate aesthetics, making it perfect for fans of all ages. Hero Droid BB-8 brings to life the amazing hero from Star Wars: The Last Jedi! Now you can re-create your favourite scenes from the movie or embark on new exploits with this RC droid by your side! Take home Hero Droid BB-8 from Spin Master and roll into adventure!

Large plush topped off with a familiar Trainer hat: this is an amazing Pikachu! Hug it, swap out hats, wrestle with it! Hat is one size – 7 inches in diameter – and fits most teens and adults! Plush stands 13 inches tall without hat and 16 inches with hat. A Pokémon Center Original design.

Gear up like a Mandalorian warrior with this Nerf Rival Apollo XV-700 blaster and face mask! Inspired by the all-new Star Wars: Battlefront II video game. Available exclusively at GameStop later this Fall.

Madden NFL 18 takes a significant visual leap with the power of the Frostbite engine. See stunning new stadium exteriors surrounded by vast cityscapes and watch the spectacle of NFL gameday come to life in the most photorealistic game to date. Play each matchup to your specifications by selecting from three new Play Styles or play the best real world match ups each week in Play Now Live! With the introduction of even more ways to play, coupled with your favorite modes, Madden Ultimate Team and Franchise, this is Madden like you’ve never seen before.

Embark on an endless Star Wars action experience from the bestselling Star Wars HD videogame franchise of all time.

Experience rich and living Star Wars multiplayer battlegrounds across all three eras: prequel, classic, and new trilogy. Customize and upgrade your heroes, starfighters, or troopers, each with unique abilities to exploit in battle. Ride tauntauns or take control of tanks and speeders. Down Star Destroyers the size of cities, use the Force to prove your worth against iconic characters such as Kylo Ren, Darth Maul, or Han Solo, as you play a part in a gaming experience inspired by 40 years of timeless Star Wars films.

You can become the master of your own Star Wars hero’s journey.

Get a little wearable ROCK magic! The Electronic Guitar Shirt is not a toy that plays pre-canned musical riffs. It is a real musical instrument that allows you to play your favorite songs and sound great doing it.

All major chords are recorded from a real electric guitar, and allows you to strum just like you would a real guitar. The included mini amp clips to your belt and gets plenty loud with great sounding amplification circuitry. The tone knob on the amp lets you adjust the sound just like a real guitar.

Don’t forget, you can see everything shown above and more in GameStop’s full lineup of in-store and online GAME DAYS deals here! 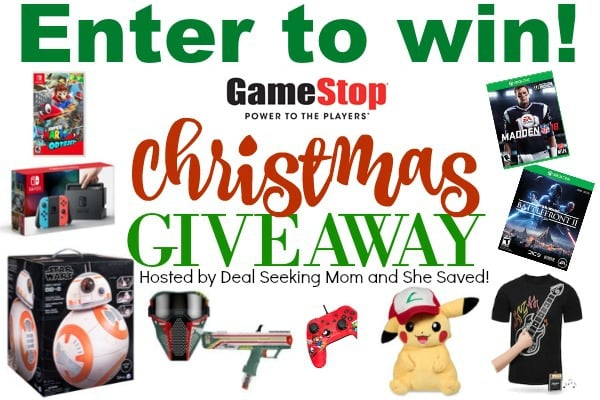 Entering is EASY!!! Entering on the widget below will enter you to win one of TWO of these amazing prize packages valued at over $800 and including everything you see in the photo above! At the close of this giveaway, TWO winners will be selected (US ONLY) to win everything shown in the image above which includes:

This giveaway will close Tuesday 19th at midnight (MST)… Once closed, we will each select one winner who will have 48 hours to respond to claim their prize! GOOD LUCK!!!